As part of my ongoing obsession with generating the highest quality prints, I have tried a variety of canvases over the years. After a few recent problems, I think I’ve found one that’s going to work for me going forward.

The first time I printed a photo to canvas was on my old Epson 2200 about a half-dozen years ago. The canvas I used was Epson Matte, a thick, heavy, 100 percent cotton product which generated excellent images but which was hard to work with. As I soon learned, it was also abrasive. After a few dozen images, canvas dust started to accumulate and the printer started making strange noises. I soon switched to a true commercial printer, the Epson 4800, which was much better suited to large volumes of canvas — and, of course, it could print on wider media.

That allowed me to try a different canvas, Epson’s Premium Canvas Satin. This canvas was thinner and more supple so it was much easier to stretch. It was made from a mix of cotton and polyester, which made it more “stretchy,” which helped prevent sagging of the canvas as the humidity changed (a big deal in Alaska, where it can get incredibly dry in the winter).  I also liked the satin finish but it wasn’t a critical factor for me. What was critical was the image quality, and it was very, very good. It allowed Bennett Images to be among the first to market with Alaska photos on canvas and our business took off as a result. People liked the colors, the texture, and the fact that they didn’t have to frame the image and could simply hang stretched canvases right away. I eventually upgraded to an Epson 7900 and have been happily printing with it ever since.

Then, for some unknown reason, Epson decided last fall to stop offering Premium Canvas Satin and switched instead to Signature Worthy Exhibition Canvas Satin. I ordered some, figuring newer would be better. Wrong. The new canvas was very thick and stiff. When I printed one of my best-selling images, Susitna Sunset, 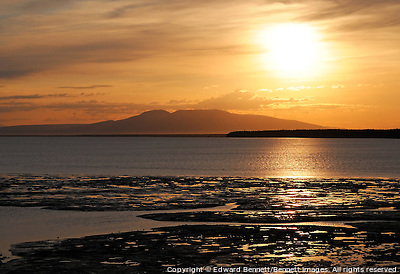 I got curious banding in the water. And when I laid out the finished prints to dry, my house filled with a nasty chemical odor. What was going on? Was I alone in having these problems?

Actually, no. One of my favorite dealers, Inkjetart.com, posted a warning about the Exhibition Canvas products, saying that when people tried to roll a protective coating on finished prints, the ink would come off the canvas. I then contacted Colorbyte Software, the makers of ImagePrint, the program I use to print with. I had noticed that they had not supplied a color profile for the Satin canvas and wondered if they were working on one. Their reply: they had tried repeatedly to make a profile but could not because too much ink was accumulating on the canvas, generating wet prints.

The last thing I needed was smeared ink. Clearly, it was time for a switch. I spent a lot of time researching canvas and finally settled on Breathing Color. They have a product called Lyve Canvas, which is a cotton/poly mix with an incredibly smooth surface. It’s heavy but easy to work with, and very white without using optical brighteners, which can yellow over time — and which allows them to claim an archival life of more than 100 years. The canvas only comes in matte finish, but they make their own protective coatings in matte, satin or glossy finishes, meaning one canvas can have many looks. Oh, and they’re cheaper than Epson.

I ordered sample roll of the Lyve canvas, installed the ImagePrint profile for it, switched my printer to matte black ink, and printed one of Georgia’s favorite images, Waiting for Monet. 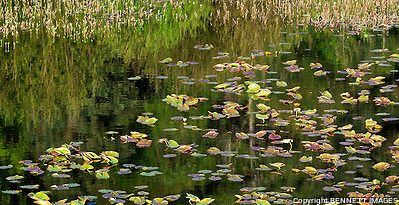 The result was an image with a startling dynamic range, with incredibly deep, rich blacks and brilliant colors. It gave so much additional depth to an already-wonderful image that it brought tears to Georgia’s eyes. I was sold.