To me, photography is more than taking pictures. I also derive great satisfaction from printing images. Partly it’s because the image becomes something tangible, and partly  because the image looks better on paper or canvas than it does on my monitor, thanks to a printer (Epson 7900) that can print more colors than my computer can display.

In recent months several professional photographers have asked me to print their images. It’s been a joy to sit down with them at the computer, tweak the image for best printed output, and then watch the image emerge from the printer.

My favorite medium is canvas, because it does something wonderful with colors, and because the texture of the cloth gives the image depth. About four years ago, Georgia suggested printing one of our aerial shots of a rainstorm over the Brooks Range to canvas, and we were so amazed by the result that we hardly ever print to paper any more. Here’s the image: 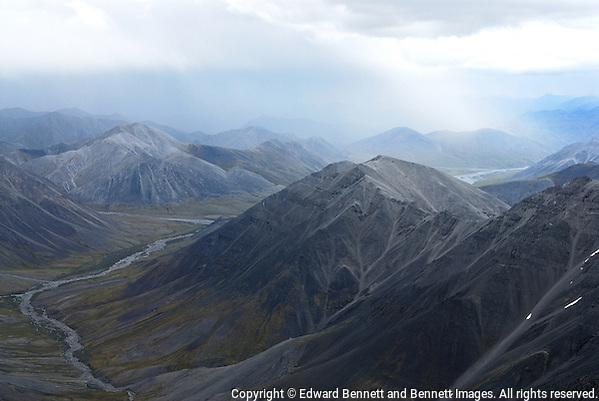 A few weeks ago, I discovered there is another advantage to canvas: it causes film grain to vanish. I learned this when I was asked to print some images that were scans of color slides. This was the first time I had ever printed from film, and the grain was plain as day on the monitor. But as it turned out, the texture of the canvas matched the texture of the film grain and to the eye, it seemed to disappear. What remained was an image with the unique saturation and tonal qualities of film, ready to be stretched onto a frame — which I did with delight!